The World Cup is in full force and getting more attention than Sonny Bill with his shirt off. Wellington has been rocking, with teams and fans galore, a brilliant fanzone right outside our Travel offices and now the All Blacks arriving readying themselves for their clash against the mighty Canucks. So caught up in rugby fever are we in Wellington that one of our Travel bloggers, Simon, lent his beatbox opera skills to this amazing piece of performance art:

Less gob-smacking than beatbox opera, but still interesting, is an update on the trends we are seeing on Travelbug. In our previous post about what this massive event has meant for New Zealand accommodation bookings we noted that prices were up and demand wasn’t. This remains true to some extent and I’ve got stats up the wazoo below.

Arrivals are well up – Travelbug bookings with an arrival date in Sept/Oct are up 168% (by value), so without a doubt. And we are, as you’d imagine, seeing a lot more of our bookings coming from international visitors. Not only have our normal #2 and #3 nations of Australia and the UK increased, but out of nowhere have come strong advances from Ireland and Canada, traditional minnows of Travelbug bookings. 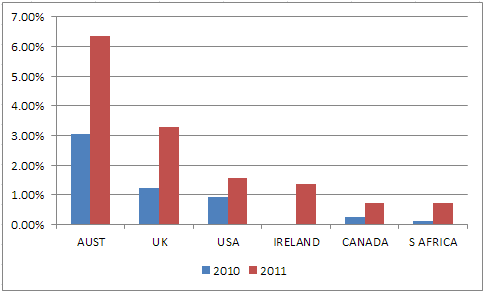 Kiwis aren’t travelling as much – the word on the street is that travel by New Zealanders is well down, particularly business travel and conferencing which are the staples of most inner-city accommodation. This downturn, combined with rooms being released back to hotels from travel agencies that weren’t able to sell as part of their packages, has seen a number of very good deals available for non-game days and even game days. More on that later.

Mobile bookings are up – bookings from mobile devices on Travelbug for the last 4 weeks are up 90% versus the previous 4 weeks, showing that travellers on the move are waiting to make their next bookings until they get to their destination. We’re looking into a mobile version of Travelbug at the moment to make these sorts of bookings even easier.

Prices have come down a lot – the room rates for stays in Sept/Oct are much closer to normal rates than we outlined in our last update and are sitting at just $149.44 per night – up just 22% on Sept/Oct 2010. Interestingly, Travelbug’s Secret Sale is nearly 11% of the value of all Travelbug bookings in September, versus just 3.3% in August. We’ve had some compelling Secret Sale deals, including key game nights, and they’ve been snapped up. Like this one for 2 nights in Wellington for the quarter finals for just $199 per night.

So get in quick and you can still get a bargain, before we get into ‘last room at the hotel’ territory and prices go back up.

Now a personal note. My Dad is from the States and so we all headed along to see the mighty Eagles take on the yellow-jacketed Wallabies. Sure, the score was a blow out, but there was nothing sweeter than the try down the blindside and it was written all over my Dad’s face. 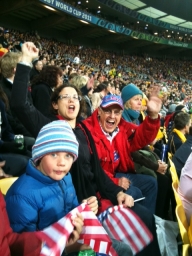 As much as I’d love for it to be so, the USA are unlikely to go further than pool play, so there’s now only one team for me to back. Go the All Blacks! (sorry Dad)