Journey into the Tararua Ranges – Wild Heaven on Earth

At Travelbug we are all about offering you the widest range of accommodation options with the most Reviews in New Zealand. But what we also love doing at Travelbug is giving you advice about all the hidden gems this country has is in its venerable coffer.

So in this post, I’m going to share with you a place I should’ve visited years ago. It’s only taken me 37 years to get myself sorted out and finally slot into my tramping boots, so surely it’s worth writing about.

A few mates and I, led by New Zealand’s very own Bear Grylls ventured last weekend in to the wet and wild Tararua ranges with our destination being Totara Flats.

The Tararua Ranges consist of a number of mountains, the highest being Mitre, which is 1,570 (5,150 ft) metres in height. The ranges run for 80 kilometres from Palmerston North down to Upper Hutt, just outside of Wellington.

In my opinion, the Tararua Ranges is native bush almost unparalleled in New Zealand. It swarms with Nikau palms, Matai, Totara and Rimu trees. Leveraging from their vertical prowess is a variety of tree ferns that sprout off them  – all in an attempt to gain a glimpse of the sunlight.

After we parked our car for the night, we headed off, weighed down by heavy backpacks and marginalised by urban muscles.

The first port of call is the impressive Waiohine Swing Bridge which is not for the faint hearted. We tossed a stick off it to the river below, and by our calculations given terminal velocity and the amount of time the stick reached the rivers surface; we were swinging 40 metres above it.

Once over the bridge, our tramp could begin proper. We were prepared for a good 3 hour walk. Our Kiwi Bear Grylls assured us this was to be an easy grade walk. In fact the tramp, whilst it begins easily enough, becomes a journey packed with step ascents and descents as you skip over creeks and stumble over never-ending tree roots.

The first indication that this was no ordinary walk, was when we were forced to cross knee deep across rushing streams. Us city folk were not forewarned, and it meant that we had to quickly toughen up and face the normal reality of tramping in the New Zealand bush with a constant splodge of water in our boots.

After the endless iterations of quite stunning wilderness, we eventually descended to the river bed which had been running beside us the whole way.

As we stumbled across the river rocks and boulders, followed by a bit more bush we were eventually greeted by a savannah of wild grassy plains. Had this been any other country, there would have been antelope and all sorts of beast grazing. But in New Zealand, not a sign of life – not even of wild deer that rarely explore this terrain.

I have to mention one incredible point here: it had occurred to us, as we came near our destination, that we had not seen one other person. Only in New Zealand, can one have such an experience, an hour’s drive from the capital city!

After crossing these plains we found our spot to pitch our tents – a raised grassy area, surrounded by small trees overlooking the river and valley and mountains on the other side. 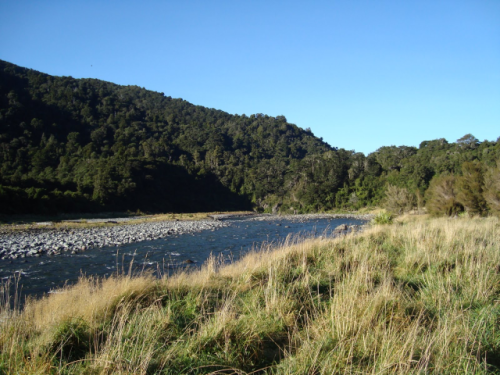 We raised our tents and promptly gathered wood for our campside fire. The great thing about the rawness of going bush and camping wild is working with nature. Everything from tying a rope between trees to dry our clothes, to cooling beer in the river, to stuffing our still wet socks with Toi Toi for insulation, nature is there to help. And to my mind, it’s those basic things that heighten life’s experiences. 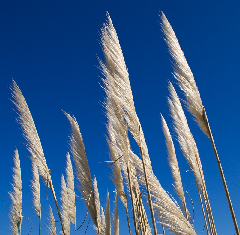 After a night of fireside banter and hilarity, we settled down for the night and drifted into sleep with the uninterrupted sound of the river roaring by.

The next morning we got up nice and early and headed back. Only 30 minutes from our return to the Swing Bridge, we heard a massive noise in front of us, and bushes being violently shook apart. We stopped dead in our tracks, to see a red deer tear off into the bush. He’d been munching on ferns and undergrowth and had been enjoying himself too much to notice us. A rare sight indeed! Apparently some explorers go bush for days in search of deer never to witness one.  What we saw was a deer just metres from our track. Awesome!

After we arrived back at the car and loaded up our stuff, we headed back to the dinky little town of Greytown to fill up before the short journey back to Wellington.

A great 24 hours away. And it’s so easy in New Zealand. 24 hours can feel like a week – when you get away from it all.