Palmageddon – in defence of Palmerston North

Last week, Travelbug unwittingly started a Palmerston North slag-a-thon, and I feel it is important to set the record straight a little and make my case for why Palmerston North really is a wonderful place. But before we get into the detail, a bit of background about how Palmageddon started.

We’ve just released the results of our second Travelbug Survey. In the survey was this question: “Where in NZ would you most like to visit?” One of the bevvy of possible answers was Manawatu/Wanganui (or Man Wang for short) which got the least votes. Palmerston North was NOT a possible answer.  What the survey actually told us, of course, was no great surprise. It told us that, given a choice of ONE place to go, they’d like to go to Queenstown, but that’s by the by.

In our media release about the survey we included a short sentence at the end that said: “Manawatu/Wanganui was ranked lowest preferred destination”. The first article to pick the release up was a gently headlined piece on Stuff that jumped on this throwaway snippet in the opening paragraph:

When it comes to travelling the length and breadth of their own country, New Zealanders appear to follow the obvious tourist attractions – snowboarding in Queenstown, sunning themselves in the Coromandel and as usual, not giving Palmerston North a look in.

Other stories emerged around the theme of Kiwis shunning Palmerston North. A storm of comments, finger-pointing, square-bashing, flag-waving and blame-laying ensues. Two sides quickly emerged: for-Palmy and against-Palmy, summarised nicely by these two snippets. First is a comment on Stuff detailing a poor view of the Knowledge City:

I went to Palmy once and got hit by a taxi. Driver drove away laughing while I lay on the ground crying. Next time I went I almost got beaten up by a girl with no shoes. I think Palmy is the worst place in NZ… and I used to live in Flaxmere!

On the other side was this letter to the editor that appeared in the Manawatu Standard: 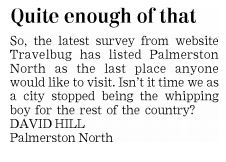 In the interests of complete transparency, I should confess that I lived 18 of my most impressionable years in Palmerston North. I loved the city as a place to grow up. It’s where I was hit on the head repeatedly by hockey balls and introduced to the best dried fruit in the world (dried bananas, not banana chips) at the bulk bin shop that was in Square Edge. So I’m joining the city’s advocates by putting together a list of the reasons I loved Palmy, in no particular order:

1. Massey – quite possibly the best university campus in the world, a little educational universe all of its own on the outskirts of town. Original Massey rocks.

2. The Lido swimming complex on Park Road – this is where I learned to swim and it is even more amazing now, with hydroslides, multiple pools for all types of swimming and diving. Seriously, if the weather is even half decent when you are next in town, you should check out the Lido. You’ll thank me.

3. Skateworld– when my family moved to Palmy, disco and roller skating were all anyone wanted to do and Skateworld was the perfect mash-up. Games, music, sneaky pashes in the corner by the loos: the perfect weekend in a town of dubious weather. You can (just) see it on the right of this image.

Skateworld closed in 1986, but so enamoured with skating is Palmy that they’re soon to be the next home of the portable ice skating rink.

4. The Esplanade – sure Wellington has the Botanical Gardens, but the Esplanade is where it’s at. Playgrounds, aviary, rose gardens, fountains, hockey and cricket grounds, model train, walking tracks and a river – everything you could want. The adventure playground there would have to be my pick of the things to do in the Esplanade so check it out.

5. Fewer people and all that entails – one of my colleagues is from Palmerston North and he said his favourite thing about it is that there are not many people. Parks are easy to come by, there’s more space, it’s quieter and calmer than plenty of other places. There’s a lot to be said about things being easy, so this one gets my vote too.

6. Movies, or at least watching movies, are a way of life. When I first started throwing jaffas at screens, Palmy had just the Odeon, Regent and State theatres. Now it has Downtown Cinema 8 and Palmy has more screen inches per capita than anywhere in the world. That fact is made-up, but at one point Palmerston North did actually have the highest movie-watching rate in the world. Say what you like about the reasons, Palmerstonians love their flicks.

7. Cycling – if you like to bike, Palmy is the place to be. A quick bike ride can take you all over town and it is mostly flat. One day on a school trip we went on a bike ride to Ashhurst and back, and even though it was actually harder to ride downhill into the wind than it was to ride up the other side, it was a great day out.

8. Cobblestone pies – I don’t know where they went, but these were the best pies that have ever been eaten by anyone ever. Many a Palmerston North Boys High School waistline was spoiled by Cobblestone pies from the tuck shop, and although it seems you can’t buy them anymore, you can find memorabilia like these cufflinks.

These are just some of the reasons I think Palmerston North is a wonderful place, and even though none of the Palmerstonians I spoke to live there anymore, I reckon they’d agree.

So enough of the Palmy-bashing, people! It is a lovely, flat, easy, green, cinema-loving, skating-crazy, knowledge-hungry town and it will always have a special place in my heart.

Tell us why you love Palmy, and if you feel like booking a trip there, check out the great rates here.