Tipping in New Zealand – why don't we do it more often?

Close your eyes and imagine you’re at an Auckland hotel. You’ve just checked out, and a nice hotel employee piles your bags onto a trolley, takes them outside, waves over a taxi and helps you get your stuff into the car. Before you get in the taxi do you a) thank him sincerely and give him a smile, or b) slip a few bucks into his hand for his efforts?

Two recent events have brought tipping onto my radar. The first was our Travelbug survey in which we discovered that 85% of Kiwis don’t tip hotel staff. The second was my recent trip to Las Vegas where I was tipping willy-nilly and anyone who was even slightly helpful had money thrust at them. I think at one point I may have even tipped a guy who helped me fix my glasses. 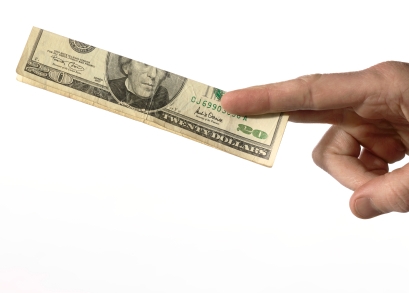 In New Zealand, tipping simply isn’t habit. I think for a while, brochures even told tourists arriving into the country that tipping wasn’t required in New Zealand. But how common is it, and how common should it be?

I’ve worked in restaurants and as such when I eat out I err on the side of generosity, but the way I tip here is very different to the way I tip in the USA. In NZ, I will use a tip as a reward for great service. If everything goes well I’ll leave a tip. If there’s something bad about the experience I won’t tip. So it is more of a carrot/stick scenario, but the problem is the wait staff don’t know there is the chance of a carrot – their days are filled mostly with sticks and as such service tends to be sup-optimal.

When travelling in the USA, however, tipping is the default. Unless the waitress spits on me, she’s getting a tip of 12-15% or something like that. Not leaving a tip would be me spitting on her in return.

Today I stopped and asked the top-hatted concierge of a 5-star Auckland hotel if he gets tipped much. This guy is clearly great at his job. He’s friendly, big smile, remembers your name and he told me that for him it is all about providing great service. He’s also at a hotel where the guest mix should mean that he’s more likely to serve people that are more inclined to tip. But still, tipping was still just a reasonably frequent occurrence for him. Put this guy in Las Vegas and he’d have his pockets overflowing with tips, no question. Good job, Kevin at SKYCITY Grand, you deserve stacks of tips.

The level of service I experienced in Vegas was, on average, a decent notch above the service I get in NZ hotels and restaurants. Let me be very clear here: there is fantastic service all over New Zealand and Kiwis are just as capable as anyone else of providing awesome hospitality experiences. On average, though, I do believe that the level of enthusiasm of staff is slightly lower, the smiles slightly smaller and the extra mile is more of an extra kilometre.

And I think tipping has a lot to do with it. There’s big upside in the USA to delighting your customers as everyone tips and the % of the bill that they choose when they pay is easy to increase. Using the carrot analogy from earlier, there’s the chance of a really big carrot (like Ohakune big). In NZ it’s harder to really want to wow your guests because your first need them to be the sort of person who tips, and then you’re asking them to tip a little more. That’s a big obstacle.

There’s another reason I think we don’t casually tip as much as they do in the USA: we don’t have $1 bills. This sucker is the traveller’s best friend in the USA. Tip $1 per bag, $1 per drink, and so on. A sneaky George Washington in the palm and you’re on your way. In fact, in many cases you want to get rid of the little green-backed buggers because they start clogging up your pockets. The US also is a more cash-based culture with people carrying big rolls of notes, leaving the payment for their meal on the table when they leave and so forth.  As such, casual tipping just feels different in NZ and seems more difficult, as palming a wee $1 coin seems cheaper and more ‘token’ than a note does.

So, I guess what I’m saying is that we should bring back the $1 bill.

Well, maybe not that. But I think there’s room for us to all start tipping a bit more for generally good service where we find it. Let’s help our service staff see the value in delighting their customers through more than just the warm feeling inside of being great at their job, and maybe more and more we’ll find reason to slip a shiny little Kotuku in the palm of the guy who helps us into the taxi.

Do you tip? Why, why not? We’d love to hear your thoughts.