It’s time to announce the annual Travelbug Awards. As they’re a little late this year, I’ll cut right to the chase – please join me in congratulating the team at IBIS Wellington who have taken out the top Platinum award!

And, in case you’re new to Travelbug, these Awards are one of the ways in which we recognise New Zealand accommodation operators who have done an outstanding job over the last 12 months in terms of number of bookings and the quality of their guest reviews.

So, well done to all of the operators who have won a Travelbug award this year and thank you to all of the Travelbug customers who placed a review. Your effort keeps other travelers well informed.

Read on for the full story…

It was a close competition this year, but IBIS Wellington came up trumps, taking first place in the Trade Me Travelbug awards. This means that IBIS was rated higher by guests than any other commercial accommodation provider listed on Travelbug across the country.

“It’s an award to be hugely proud of, especially as it’s a competition between all of Travelbug’s listings nationwide”, says Trade Me’s Head of Travel, Daniel Bridges.

IBIS Wellington’s Hotel Manager, Colin McClean, said the news of the win was very well received and he’ll be celebrating with his team to congratulate them all on living up to the company’s values of always putting the customer first. “We’re absolutely delighted with this win and look forward to striving to win it again next year!” says Mr McClean.

Leith Valley Touring Park in Dunedin earned a Best in Region award this year, showing the increased quality and popularity of holiday parks.

It’s not all about luxury hotels

Like last year, we’ve seen a wide range of accommodation types do incredibly well in the Travelbug awards.

The Cambridge Hotel in Wellington deserves a special mention here. Famous for their free Kiwi BBQ on Wednesdays and a breakfast menu that features $3 eggs on toast, this heritage backpacker has won a Platinum award for the fourth year in a row!

“We’ve been in the business of providing excellent value for money for some time now and we love it. We have a lot of repeat guests so we know we have the right model of environment, service and value for money!” says The Cambridge Hotel’s General Manager Finnbarr Kerr-Newell.

For the second year running, Wellington has claimed more Platinum awards than any other region.

In the ‘Top Reviewed’ award category, properties in Canterbury and the Wairarapa gained the highest number of 100% ‘thumbs up’ ratings from their guests.

The three things that we see consistently in reviews by travelers is that people place a high value the simple things – friendly staff, clean rooms and comfortable beds. This is across the board for all accommodation types. “As a member of the Tourism Industry Association of New Zealand, who are tasked with providing an amazing visitor experience as part of the Tourism 2025 framework, we’re really proud of the calibre of hotels, motels, lodges and backpackers that we have on our site and this year’s awards prove that the standard of accommodation that they’re providing is second to none”, says Trade Me’s Daniel Bridges.

The roll of honour

Total Travelbug winners in each category:

Travelbug is part of Trade Me. We provide an easy way for Kiwis to book accommodation throughout New Zealand. For the largest number of hotels, motels and more, local support from a Wellington based team, and a website that lets you compare prices over 10 days, visit travelbug.co.nz.

The annual Travelbug Awards have been running for five years and are highly regarded in the industry. There are five award categories and to win an award, a property needs to have met criteria for booking numbers, number of reviews placed and quality of reviews. 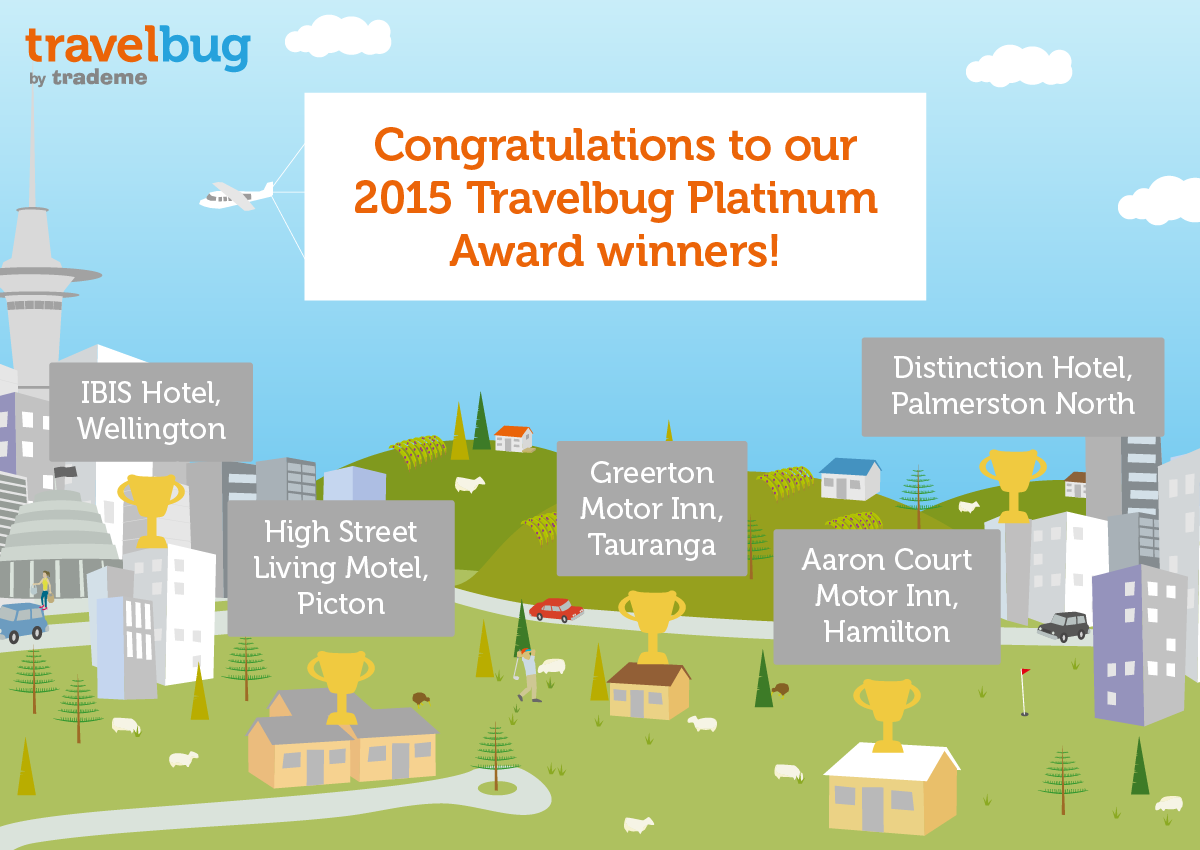